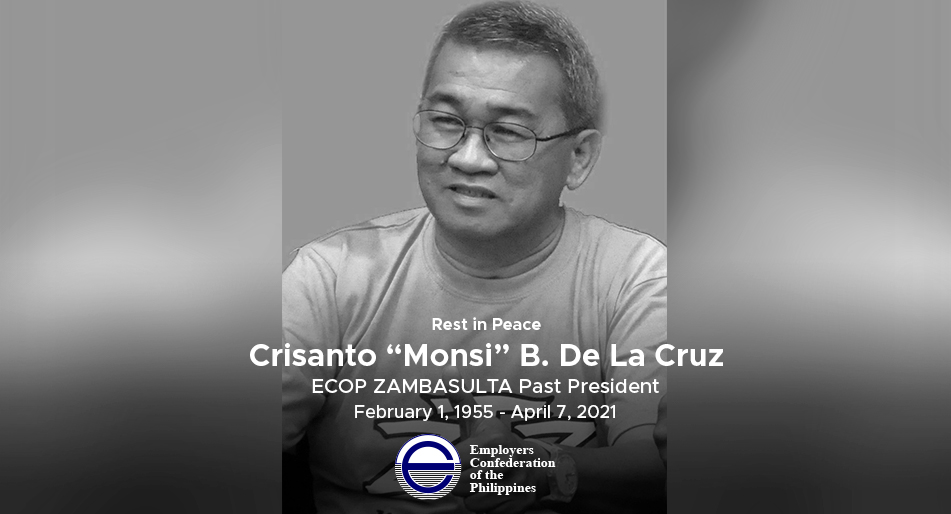 “He was designated Monsignor since the late 1990s until he left the priesthood. Hence, he was called ‘Monsi’ by everybody.”

The Employers Confederation of the Philippines announces with great sorrow the passing of ECOP ZAMBASULTA Past President, Crisanto “Monsi” B. De La Cruz, on Wednesday, April 7, 2021, due to massive cardiac arrest. He was born on February 1, 1955.

Monsi was a Diocesan Priest years before he left priesthood in September 2006. He lived a very meaningful life by advocating for education, health, clean environment, and livelihood provisions. After several unsuccessful attempts of securing a public office position, he became the City Councilor of the First District of Zamboanga City in 2019. He also headed the majority group in the City Council of Zamboanga City now called as the “Conscience Block”.

In 2007, he was a member of the Board of Directors of the Zamboanga City Chamber of Commerce and Industry Foundation, Inc. In 2008, he led the group that formed the ECOP – ZAMBASULTA Chapter and became its Charter President. He headed the Chapter until 2017.

A memorial visitation is currently held at the Immaculate Concepcion Church, the church that he re-built.

Mental Health in the Workplace: Building Employees’ Resilience and Wellbeing